GKN’s multi-year partnership with Panasonic Jaguar Racing made its competitive debut last weekend (2 - 3 December), when the 2017-18 FIA Formula E championship began on the streets of Hong Kong. A drama-packed double-header saw the team perform strongly and consistently throughout. Nelson Piquet Jnr finished fourth in Round 1 on Saturday after a brave overtaking move in the final moments of the race. Having qualified second on the grid for Round 2 on Sunday, Mitch Evans’ fourth place finish was upgraded to a provisional third place* following a post-race investigation, giving the team its first ever Formula E podium.

Over the forthcoming seasons of the world’s elite electric racing series, the global engineering group will provide design, manufacturing and consultancy services to the British-based Formula E team. From driveshafts and differentials to additive manufacturing, GKN will apply its wealth of expertise to help make the Jaguar I-TYPE go faster.

Phil Swash, GKN Driveline Chief Executive Officer, said: “Formula E is a competitive showcase for electric car technology, and is therefore an excellent arena for GKN to continue its activities in global motorsport.

“As a world leader in advanced drivelines, lightweight structures and state-of-the-art electrified systems, GKN is proud to join Panasonic Jaguar Racing in its race to innovate and inspire on the world stage. In addition, as a major supplier to the Chinese automotive industry, it’s wonderful that our Formula E story began in Hong Kong.”

Having the GKN logo on the Panasonic Jaguar Racing cars in Hong Kong symbolises more than just its partnership with a Formula E team. The company’s involvement at the pinnacle of electric car racing matches its status as a leading global supplier of electrified driveline technology, with R&D and production facilities around the world, including in China.

GKN and Panasonic Jaguar Racing – building on a rich heritage

Formula E continues the long-running partnership between GKN and Jaguar, dating back to 1935 when GKN supplied driveline technology to the first SS Jaguar saloon. Today, GKN supplies every Jaguar model on the market with a range of driveline technologies, including high performance CV Joints and intelligent all-wheel drive systems.

GKN driveshafts have featured on almost every Jaguar high-performance road and race car, from the Le Mans-winning C-Type in 1951 to the iconic XJ220 of the early 1990s.

Formula E represents GKN’s latest motorsport commitment, as the company already has an enviable heritage in championship-winning and record-breaking race cars. Stretching back over half a century, GKN technology helped power early successes in Le Mans, through numerous victories across rally series to the birth of the electric motorsport era. In recent years, GKN systems helped electric vehicles to class wins at Pikes Peak in 2012 and 2013. Its electric flywheel was part of Audi’s winning formula with the R18 e-tron Quattro at Le Mans in 2014.

* - the result of Round 2 remains provisional subject to an ongoing appeal process. 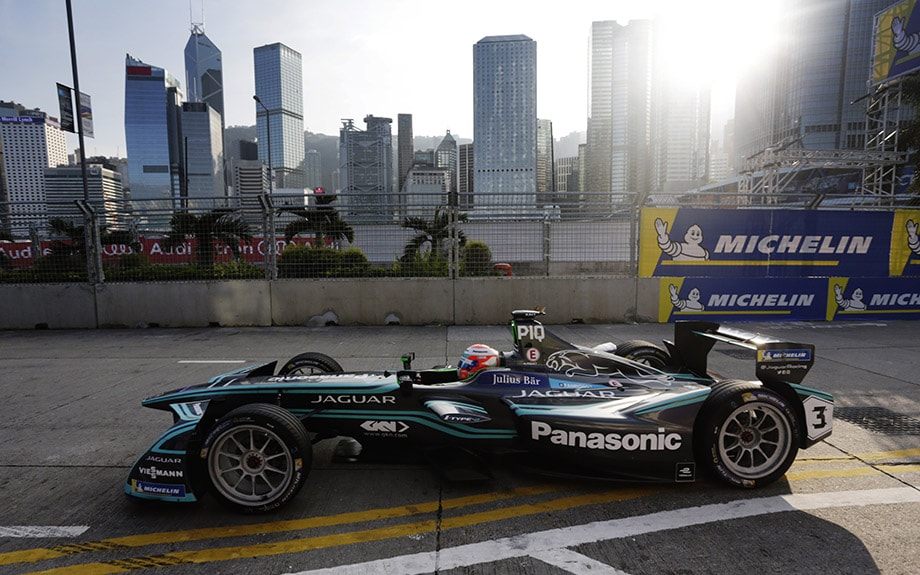 GKN plc is a global engineering group. It has three divisions; GKN Aerospace, GKN Driveline and GKN Powder Metallurgy, which operate in the aerospace and automotive markets. Over 58,000 people work in GKN companies and joint ventures in more than 30 countries. GKN is listed on the London Stock Exchange (LSE: GKN) and recorded sales of £9.4 billion in the year to 31 December 2016.

GKN Driveline is the world’s leading supplier of automotive driveline technology and systems. As a global company serving the world’s leading vehicle manufacturers, GKN Driveline develops, builds and supplies an extensive range of automotive driveline technologies – for use in the smallest ultra low-cost car to the most sophisticated premium vehicle demanding the most complex driving dynamics. GKN Driveline is a leading global producer of CVJ Systems, four-wheel drive Systems, Trans Axle Solutions and eDrive Systems and operates in 23 countries at 49 locations employing approximately 28,000 people.

Jaguar’s Formula E programme will create tangible R&D benefits for the electrification of future Jaguar Land Rover road cars and is designed around the team’s founding principle, ‘Race to Innovate’.

Manufacturers can design their own powertrain, which includes the motor, transmission, inverter and the rear suspension. Common components across all teams include the carbon fibre chassis and battery to control costs. The focus is on developing electric vehicle powertrains.

Beyond its all-electric concept, Formula E is also unique in the world of motorsport for its choice of venues. With the exception of the Mexico ePrix, every round of the championship takes place on temporary street circuits in the centre of the world’s major cities.
Each race day sees all track action including practice, qualifying and racing, taking place in a single day. Beginning on December 2, the 2017/18 calendar includes 14 races in 11 cities, including double-header races in Hong Kong, New York and the season finale in Montreal.