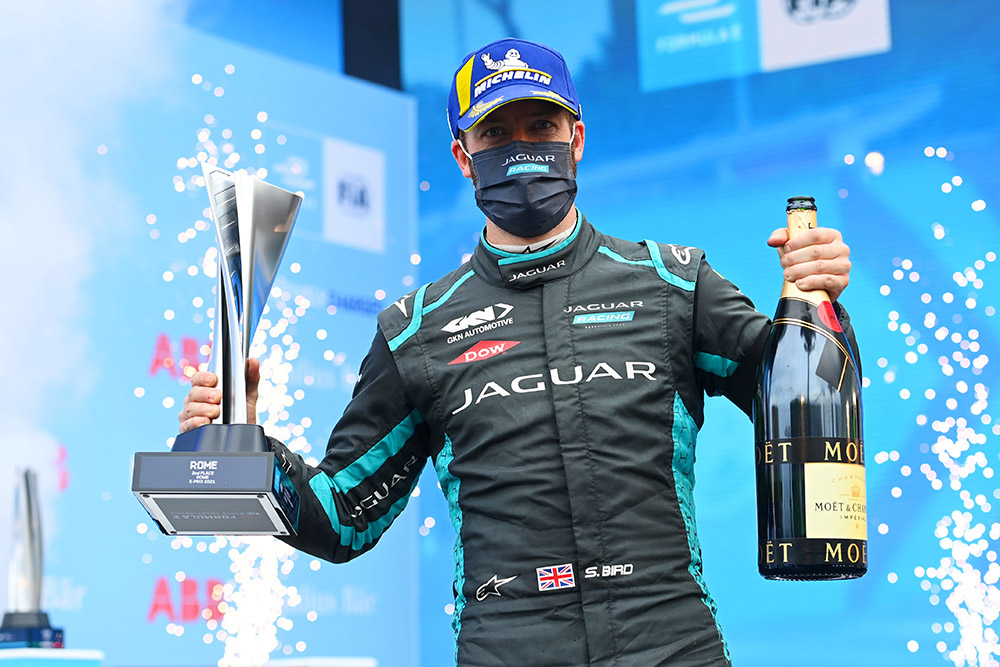 London, UK, May 2021: With seven races down and eight to go, we are approaching the half way point of season 7 of the ABB FIA Formula E World Championship. As the series enjoys a 5-week race gap between Monaco and Puebla, we take this opportunity to look back on our partner, Jaguar Racing’s, season so far.

The pace and efficiency of this season’s car, the Jaguar I-TYPE 5, was demonstrated from the outset – something that as official eDrive partner of Jaguar Racing, we are particularly thrilled to see. Engineers at GKN Automotive have been working closely with the team to develop cutting-edge technology for the I-TYPE 5, focusing on the electrified drivetrain. A key element of this is the development of the latest advanced motor and inverter cooling technologies to enhance system efficiencies and enable the racer to go faster for longer on track.

Jaguar Racing had a strong start with Mitch Evans securing third place in the Season 7 opener in Diriyah – the series’ first-ever night race. It was a polished performance by Evans, who made a decisive overtake on René Rast with just two minutes to go to earn the final spot on the podium. Sam Bird was also showing great pace before a collision with Alex Lynn caused an early retirement.

Round 2 in Diriyah the following day saw Sam Bird maintain his streak as the only driver to have won a race in every Formula E season. After starting the race on the second row of the grid, an overtake on Sérgio Sette Câmara on the first corner progressed him into second. Bird battled with his old teammate Robin Frijns for the majority of the race before taking his debut victory for the team. Despite a collision ending Mitch Evans’ race, the two podiums achieved over the double-header meant Jaguar Racing left Saudi Arabia leading the Teams’ Championship by four points.

Next up the Jaguar Racing team headed to Rome, where both drivers had claimed victory in the past. It was here in the Eternal City that Jaguar Racing secured its first double podium finish in 30 years, with Bird and Evans finishing second and third respectively. Both drivers showcased their skill and ability, in addition to the performance of the I-TYPE 5, as they carved their way through the field – Bird gained eight places while Evans moved up nine.

In the second Rome E-Prix, Evans finished in sixth after starting from twelfth, while Bird’s collision with Nyck De Vries on the final lap put them both out of the race. After the first four rounds, Jaguar Racing was leading the Teams’ Championship by 17 points while Bird and Evans occupied the top two places in the Drivers’ Championship.

Valencia was a difficult weekend for the Jaguar Racing team. Two difficult races and challenging conditions for group one qualifiers meant our partners came away from the first Spanish E-Prix without any additional points. This resulted in them losing their lead of both the Teams’ and Drivers’ Championships.

In the most recent race of the season, the all-electric race series headed to the storied streets of Monaco to compete on the full grand prix layout for the first time in Formula E history, highlighting just how much the technology within the series has developed. The legendary circuit played host to a thrilling race, in which both Jaguar Racing drivers finished in the points.  A momentous overtake on António Félix Da Costa heading into Beau Rivage saw Evans take the lead, however on the final lap Da Costa was able to snatch the lead back into the chicane. Robin Frijns then overtook Evans for second place just before the start/finish line. Although starting in sixteenth, Sam Bird carved his way through the pack to finish in seventh. This means that Jaguar Racing now sits second in the Teams’ Championship, just two points behind the Mercedes-EQ Formula E Team. Mitch Evans is third in the Drivers’ Standings, eight points behind the current leader, while Sam Bird is fifth.

With the strong start to the season our partners have had, we at GKN Automotive are looking forward to returning to racing on June 19th and 20th in Puebla, Mexico. The series then heads to New York, London and Berlin, where there’s sure to be lots more action as the sport showcases the development and potential of EV technology. We’re looking forward to continuing to apply our driveline and software development expertise to the I-TYPE 5 - particularly with our software engineers joining the team for the latter half of the season - and helping Jaguar Racing to keep pushing towards the Championship title.